Enjoyed and consumed on a daily basis in many countries, bread is an important factor driving the consumption of cereals thanks to 4 simple ingredients (cereal flour, water, salt and ferments).

Lesaffre has set itself the challenge of finding the best possible combinations for producing tasty bread offering optimal value and nutritional content.

With rye bread in northern Europe, steamed bread in Asia or flat bread in India and the Middle East… the French clearly aren’t the only ones with a fondness for bread! This is an age-old foodstuff with an extraordinary track record as it is consumed by millions of people worldwide on a daily basis.

“It’s at the base of the food pyramid in many countries, making it an essential foodstuff which helps provide a healthy and sustainable diet for millions of people”, explains Corinne Lesens, research and innovation director for Lesaffre’s Baking Science Department.

Bread has become a universal foodstuff and one we consume daily although it contains just four simple ingredients used in an incredible variety of ways. This variety can be expressed through numerous factors:

The rich variety of flavours to be found in bread is also explained by the biodiversity of the ferments used, yeast and lactic bacteria, constituting the bread’s microbiota and essential to fermentation.

Lesaffre seeks to achieve the best combinations of these different factors. These efforts, combined with its extensive hard skills in the baking industry, enable it to obtain the best results, successfully combining pleasure with nutritional value.

Bread contains many nutrients which contribute to a balanced diet. It chiefly contains:

These minerals are set free and made available during the natural transformation process which occurs with fermentation.

It should be noted that the content of these nutrients varies according to the refining process and the type of flour used. For example, bread produced using rye flour is particularly valued for its phosphorus, magnesium and zinc content. Additionally, as recommended by the WHO, the use of wholemeal flour should be encouraged.

How fermentation can improve the nutritional value of bread 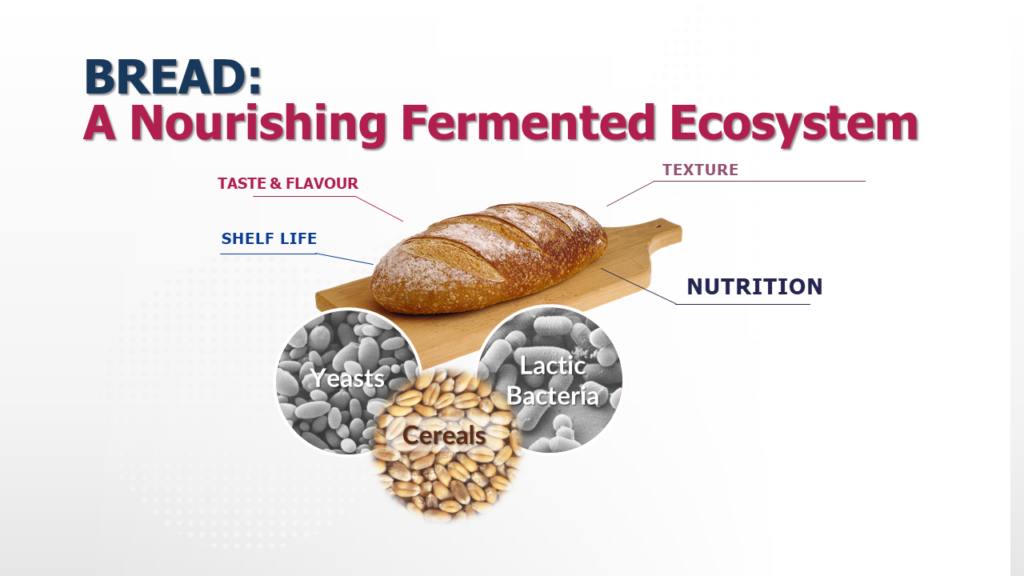 The results of the review demonstrated that acidification plays a role in the release of minerals (Fe, Mg, Zn, Ca) naturally found in wholemeal flours under certain fermentation and recipe conditions. They also showed a positive effect on glycemic response and satiety. Some of the nutritional benefits of sourdough fermentation were studied in bread only made with fibre-rich wholemeal flour.

And the results showed a lower glycemic response and an increase in satiety for longer periods of time3. Furthermore, when sourdough fermentation increases acidity, it improves mineral availability (iron, magnesium, zinc, calcium) in the grains4. The type of fermentation can also help to reduce FODMAP levels in bread5, which can cause unpleasant gut problems in people who are sensitive to their effects.

Fermentation: a useful means of improvement

As it is consumed every day, bread is a great means for bringing consumers valuable nutrients and health benefits. Today, bread can be enriched with nutrients to meet specific needs. In this respect, the vitamins produced naturally through biofermentation are particularly useful. Similarly, adding vitamin K2 to bread-making products can help tackle a challenge common to humanity as a whole, that of living healthily for longer, with this vitamin being supported by more than 20 clinical trials demonstrating the benefits it offers for the health of our bones and cardiovascular system.

Improving the nutritional profile of bread can also be achieved through the potential of the yeast. To boost the protein content of bread, yeast proteins have the benefit of offering a complete profile including essential amino acids, a high level of digestibility and the absence of an aftertaste. For its part, baker’s yeast which has been deactivated using a heat treatment process also offers the key benefit of reducing salt levels in bread by almost 30% without affecting the taste or texture. This is great news when considering that consuming 100 g of bread (containing 1.5 g of salt) provides 18% of our daily salt intake for men and 22% for women. The bakers are reacting: for example in France, in March 2022 the stakeholders in the wheat, flour and bread industry committed themselves to gradually reducing salt content, with the aim of limiting content to 1.4 g of salt per 100 g of traditional bread, 1.3 g per 100 g of wholemeal bread or 1.1 g per 100 g of sandwich bread by 2025.

Drawing upon its hard skills in the fermentation sector and as part of its Bake for Care commitment programme, Lesaffre is developing Nutrition & and Wellness solutions for its baking clients.

Much to the delight of consumers everywhere, bread is available in a wealth of forms and recipes, with new ones constantly appearing. As we have seen, bread offers an excellent way to bring consumers the nutrients they need, and on an almost daily basis scientific research is revealing the full potential of this tasty food product produced using fermentation.

5 FODMAPs: Fermentable Oligosaccharides, Disaccharides, Monosaccharides and Polyols. These are present in numerous food products and may contribute to the appearance of digestive symptoms among people suffering from sensitive stomachs

In spring, gardening differently thanks to biocontrol

Yeast selection and improvement for the benefit of all